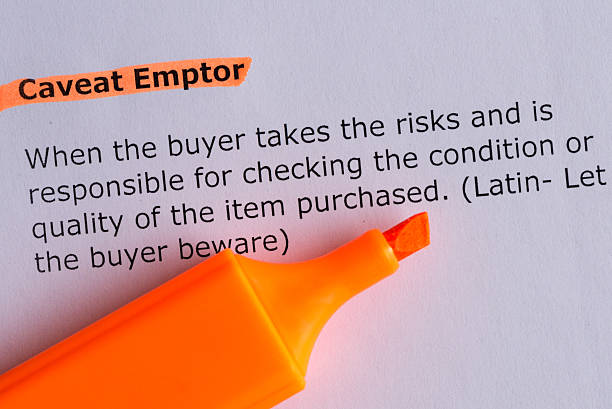 Some say law evolves slowly. They point to the fact that we still use Latin terms, dating back to the beginnings of common law in 1066. I don’t necessarily agree that the law evolves slowly, although I’m sure you can find examples of that.

The use of Latin terms doesn’t mean we don’t like change. We use Latin terms because they have proven to be robust rules that have survived for centuries. By its nature, common law challenges and refines concepts through repetitive court cases. Lawyers refer to precedents – previous judicial decisions – when making new or nuanced arguments for change.

These incremental changes refine the law year after year, decade after decade and century after century. Latin terms are used as short form to explain legal concepts that have survived. If there’s a Latin term to explain it, the concept has been tested over time.

Caveat emptor is one of those concepts. It translates into: “Let the purchaser beware.” It’s a short form for ‘caveat emptor, quia ignorare non debuit quod jus alienum emit,’ which translates to: “Let a purchaser beware, for he ought not to be ignorant of the nature of the property which he is buying from another party.”

According to Wikipedia, caveat emptor was first developed in an English case in 1603, in the case of Chandlor v Lopus. The buyer of a “healing rock” realized that it wasn't healing him. He sued the seller. The court ruled that the seller didn’t make any warranties that the rock was, in fact, healing. That case brought the term “caveat emptor” into the legal world. For a long time in England, this meant that buyers were responsible for making their own inquiries into products and services. It wasn't until the government brought in consumer protection laws that the onus shifted to the sellers.

This idea that buyers must make their own inquiries survives in the real estate market. This principle is firmly entrenched in Manitoba law. Unless the seller makes specific representations or warranties about the property, the principle of caveat emptor applies. I’ve written about it before. The issue is always on our minds when we talk to our real estate clients. I was reading an article in the news where a couple bought a house in the recent hot market sight-unseen in Sudbury, On. They lived in BC and were desperate to buy a house in Sudbury. The husband was originally from northern Ontario and they decided to move to Sudbury where they could afford a home.

But, the market was so hot and properties were selling so quickly, that they were essentially shut out. So, from Vancouver, they made an offer with no conditions without seeing the property.

“No conditions” means they’re agreeing, by way of a legally binding contract, to buy the house as it is. The principle of caveat emptor applies.  It’s up to the buyer to make his or her own inquiries.  This is also where the statement “As is, where is” comes from. They acquire the house and property as it is with all known and unknown benefits and problems. They have no recourse if they discover a problem before or after possession.

In this case, when they took possession, they found a myriad of problems. The article summarizes the problem: “They discovered cockroaches, a sewer line that needs to be replaced, gaps under baseboards, and a rotting support beam under the house.”

Due Diligence And Condition Precedents

Conditions precedent are a buyer’s only protection when a contract is made. If a buyer wants to check anything before being obliged to fulfill the contract, they should include a condition precedent in the contract. The other option is to perform all your due diligence before making the offer. But you could be wasting a lot of time and money inspecting a property that can be sold to someone else without notice.

Due diligence inspections include all inspections a buyer can make to satisfy him or herself that the property is fit for their purposes. These include general inspections like a home inspection but can also include specific inspections like the electrical system. Where properties are serviced by a well rather than municipal water, banks will often require a water test to confirm the water is potable.

It also includes financing conditions. You want to ensure the bank will give you a mortgage before finalizing the contract. Banks need to qualify the buyer and their ability to pay. But they must also ensure the property being bought is worth more than the mortgage. If you don’t have a financing condition, you may find yourself under an obligation to purchase a home without having access to mortgage funds.

So when we discuss caveat emptor in legal circles, this entire concept is captured by those two words. If I’m talking to another lawyer in the context of a problem found after possession, I can use those two words. We’ll both understand what it means and what it entails. It's legal shorthand for the legal principle. It helps us move this through the arguments and negotiations quickly.