The 1948 Red River Barrel Derby – it was a big deal!
Author:
Philippe Richer 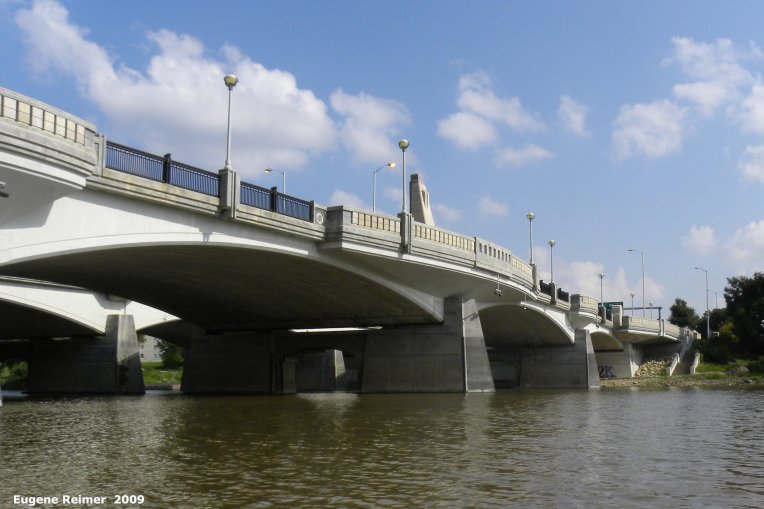 A few years after the war, on May 30th, 1947, a small group of men established the Winnipeg branch of The Canadian Tourist Club at an inaugural meeting at the Fort Garry Hotel. Its goal was to publicize the value of tourist trade by looking into everything trade related, including highways, accommodations, restaurants and assistance to tourists on highways and trains (interestingly, at the first meeting, they complained about the state of the province’s highways. I guess not much has changed since 1948…)

The following year, the Club announced a fundraiser. It would sell tickets for 50 cents which would give the purchaser a club membership (with a right to vote) and the opportunity to guess the time a 45 gallon barrel would take to travel from Emerson, Manitoba to the Norwood Bridge in Winnipeg. The winner would receive 30% of the funds collected. The club would donate an additional 50% to the Shriners Crippled Children’s Hospital Fund and would keep the final 20% to offset the costs of the promotion.

Mr. Roe, who was then secretary, made the following statement to the press: “the launching of the barrel will symbolise the flow of barrels of badly needed American tourist dollars which it is hoped will come with an influx of tourists, this summer”.

This is when the club ran into trouble. On April 9th, 1948, the police charged Mr. John Herbert Roe, with the offence of conducting an illegal lottery scheme. The case eventually made its way to the Supreme Court of Canada, making Canadian legal history.

I came across this case when doing research for a client who wanted to run a contest. The case of Rex v. Roe is listed in my copy of the annotated Criminal Code under s. 206 which establishes lottery schemes as an offence. The case stands for the principle that, while a game of pure chance is illegal, a game of mixed skill and chance is not.

Being the diligent lawyer that I am, I read the case to better understand the Supreme court’s reasoning. As I was doing my research, I noticed that at least one other case referred to this case as the “Red River Barrel” case. Courts don’t usually refer to other cases colloquially unless the case is either famous or infamous. This made me curious.

My search revealed both the Manitoba Court of Appeal Case and the subsequent Supreme Court of Canada cases. I read them both. The trial itself is not reported, but Magistrate D.G. Potter of the Provincial police court presided. A report in the Winnipeg Free Press on 15 March 1947 states that the Magistrate concluded: “They are gaining nothing from this scheme, and I am satisfied they must have taken counsel option before venturing on it”. He acquitted Mr. Roe.

The Crown appealed. Dysart, J.A. (a street at the University of Manitoba is named after him) wrote the court of appeal decision. He concluded that the derby was not a game of chance, but rather a game of mixed chance and skill. Therefore he upheld the Magistrate’s decision on that point. I’ll discuss the decision in more detail in another post, but the more I read, the more curious I became. In the Court of Appeal decision, Dysart J.A. noted that the trial occurred on the 10th of March 1948, the day after the charges were laid. The day after?!?? How is that possible? Today, it takes months or even years before a matter goes to trial. Even in those days, this would be considered light speed. How did this happen?

I started digging into old newspaper reports from that time. It appears that the Red River Derby was a very big deal. But before I discuss how the event captured the city’s imagination, I’ll explain the rules.

As discussed, the Club sold tickets for 50 cents. Ticket purchasers had an opportunity to estimate how long a barrel would travel from Emerson to Winnipeg. The promotional material provided the distance the barrel would travel and the water current speed. The barrel was to be launched at the International border in Emerson shortly after ice break up which was originally scheduled on April 10th, 1948. The ticket included a line for the number of days, one for hours, one for minutes, one for seconds, and 1/5th of a second. Ticket holders would write down their estimate and enter the draw. The closest estimate would win.

The 45 gallon capacity barrel was filled with 300 lbs of ballast. Canoe parties accompanied the barrel to ensure the barrel could be freed from any snags or beachings. One of the canoes was fitted with a radio and the signals unit followed the progress by road and relayed that information to the Club’s headquarters in Winnipeg who would then report on the barrel’s progress.

As the trial and initial acquittal occurred before the start of the Derby, the Club proceeded with the sale of tickets. The original date of April 10th was postponed due to flooding in the Red River Valley. The Derby started on May 22nd 1948. By then, the mayors of St-Boniface, Winnipeg, and Morris were involved. Bands played, and the CNR scheduled a special train with a capacity of 1000 to ferry people to the barrel’s launch in Emerson.

You may enjoy reading…